With the year closing by, Mrs. Laila, the homeroom teacher of grade 4B have created a lovely experience for the students with their assigned task. The project was that each student will pick a certain science experiment in which he or she likes, then after a period of time, the whole class makes their experiment.
The students have experienced colors, bubbles, soap, milk, food colors and many many more! We will leave you with their submissions of what “what I learned”:

Hamzah Sharairah: Salt Makes Soap Particles Stable
I learned: from this experiment that when mixing salty water with soap there would be no reaction because the ionic salt molecules easily combine with fresh water molecules. But, salt does not combine with soap.

Maya Qandil: Soap & Milk
I learned: from the experiment that the soap has a lower density than milk. 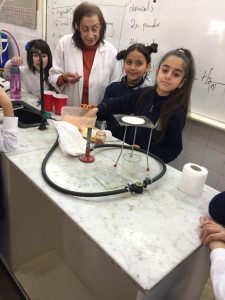 Limar AlKurdi: Oobleck
I learned: that when we mix the cornstarch with the water it will be hard and when we put it in the air it will push the particles of the mixture and will be melted.

Saif Bataineh: Water Coloring, Water & Oil
I learned: that when I use water, oil, food color, plastic vial, 2 cups and a spoon, putting them together in the cup, the oil hayamix will stay up because it has a lower density than water and when we add food color to the water it will get colored.

Dina Al-Rowashdeh & Lara Sawalha: Volcano
I learned: that when I mix the baking soda and the vinegar together they interact and thus, it will form a gas and it will create a volcano-like effect.

Daniel Hasaneh: Blow up a balloon with yeast
I learned: that if you mix all the ingredients it will create a gas and that gas will get in to the balloon and blow up after at least 20 minutes.

Jana Al Qarra: Baking soda and lemon
I learned: we notice that all of them have interacted together, by which they form what is happening during a volcano.

Hamzeh Bataineh & Joa Perdo Pipinel: Static Energy
I learned: that if I give static energy to a pen rule/pencil it is going to pull the little papers

Aya Owaynat: Lava Lamp
I learned: that the salt activates and makes bubbles start to form, the rest of the ingredients are used to color and slowly form the bubbles in the lava lamp.

Eyas Elayyan: How can I remove a piece of snow from the water using a thread?
I learned: Sprinkle a bit of salt on the thread, after placing it on the thread piece of ice and stick it,
because ice pieces lose heat and freeze water and salt on the surface.

Firas Ismail: Waterproof item that will not leak
I learned: that if you put a pencil through a plastic bag filled with water, the water will no be spilled.

Ayhm Nasser: Oxygen effect on candles
I learned: from this experiment, that when the oxygen runs out, the candles turn off, and the water filled the glass because the candle took the oxygen from the glass

Ghazi Loukasha: Reaction of higeen (brand of sanitizer) hand sanitizing gel and fine (tissues) with fire
I learned: Puring a small of amount of gel on dry surface and lighting it (fire), the gel starts burning and fire turns green, and the fire is touchable as it doesn’t burn. This is due ethyl alcohol which produces a cool flame.

Faisl Alomosh: Chemical Interaction
I learned: I took advantage of this experiment that the carbon dioxide came out strongly and blew the balloon.

Thanks Mrs. Laila for the extraordinary work and Mrs. Wedad for preparing the lab! 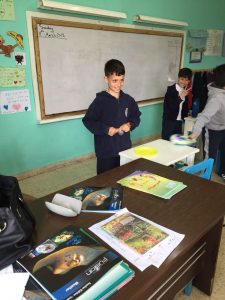 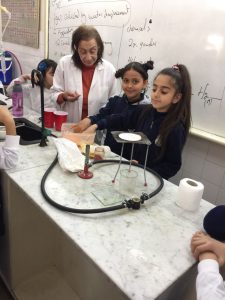 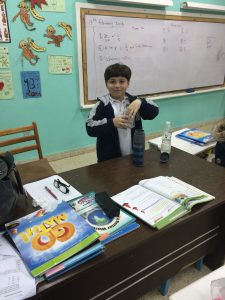 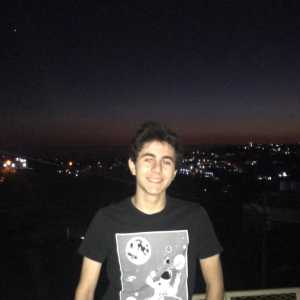